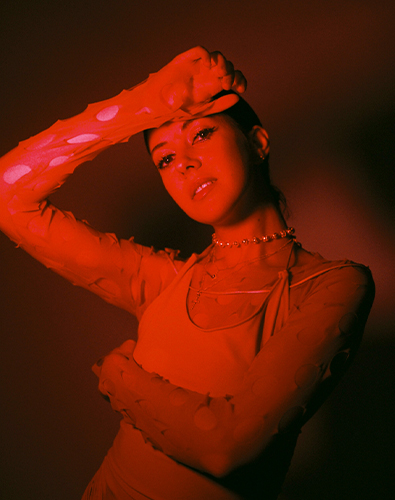 Beatriz Rosário is a 23-year-old artist who grew up listening to her grandfather's records. These were the gateway to the Fado universe and were combined with her grandmother Rosário's encouragement to explore her talent. Thus, the artistic name of Beatriz Rosário arises, with the aim of honoring the matriarch.

At the age of 17, she gathered the themes that most marked the first phase of her life and released an album, having entered the world of music with performances in very emblematic fado houses. She has already stepped on stages such as Festival Caixa Alfama, Festival F, among others. The artist pronounces with the right intensity the value of each word she sings, but she felt it was necessary to put her personal stamp on the art that chose her Fado.

Beatriz Rosário, who was born in Coimbra, moves to Lisbon at the age of 21 to complete her training at Universidade Nova, where she raises her dream of finding her own musical identity. Throughout this process, Beatriz had the opportunity to work with several national artists such as AGIR, D.A.M.A and Ivo Lucas, who guided the fado singer along the intended path.

Her EP “Rosário” led Beatriz to look for a common place between the tradition of Portuguese music and the new sounds and rhythms. The artist is having a great acceptance by the music critics with her new work. His first single, “Ficamos por Aqui”, spent 7 weeks as the number 1 song on the radio (RFM) and his EP release single, “O que é fez de ti”, already has more than 70k views on Youtube, in just 6 days.